The musical life of Anton Ludwig Wilhalm, born in 1966, started at the age of 11. Even though he had to fight hard for most things, he soon realised, that music is more than just a pass-time, and that he likes playing the trumpet so much that he wants to make it a profession.

From the local music school he first went to music academy in Innsbruck (Austria), then to the conservatoire of Augsburg and the academy for music of Detmold (both Germany).

He was member of different orchestras and ensembles in Italy, Germany and Switzerland. As winner of the international competition for wind musicians in Passau he played for radio, television and disk-recordings.

Bozen Brass is the most succesful ensemble for Anton Ludwig Wilhalm where he has most fun, too. "Here you see that hard work is worth while, if all pull together," he sais.

"Ludi stands for modesty", his colleagues state about him, he does a lot of good things, but does not want to have it shouted from the housetops. And he is energetic all the time. He has more time than anybody else, as he only needs 4 hours of sleep...

Well, from time to time it has to be more, but if you want to build webpages with Ludi, you must be able to stay up late. Nevertheless a nocturnal ping-pong with images, statements and musical wisdom for blog-posts via Skype is very fruitful and leads to astonishing results.

And during the relaunch of the Bozen Brass webpages, Ludi came in full cry with his graphical software and had new editions of the latest images all the time.

As an Apple-fan he is online with his iPhone almost everywhere in the world. He even likes to shorten longer breaks in the musical rehearsal with a little chat, sends out news for update of his webpage or learns what other wind musicians just played in their concert....

But worldly wisdom can also be heard from Ludi:"Expect nothing and take all you will get as a gift." What else can you say then "hats off", no matter whether they are black or white or in another color. 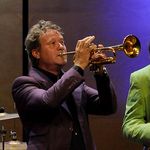 Besides playing and singing, Anton Ludwig Wilhalm is the point of contact for the ones organising concerts or workshops. He is also responsible for the pictures from Bozen Brass and the maker of all videos and the facebook pages.

When Anton Ludwig Wilhalm is not playing with Bozen Brass he can be heard solo with organ, with organ and soprano, with Munich Salonorchester Tibor Jonas or in Kurorchestra St. Moritz.

He is also an enthusiastic and inspiring music teacher making young musicians excellent trumpeters. A lot of brilliant results in music competitions are good evidence for this.

He also shares his musical knowledge in several workshops, sometimes with his colleagues from Bozen Brass, sometimes on his own.

And finally his presence in the jury of music competitions is highly appreciated.